Salted caramel is a pretty recent blip on my trend radar. I know that it is now a trend that everyone everywhere is embracing wholeheartedly- and rightly so because it is delicious! – but when I first arrived in Europe I had never tried it before and the idea of it really threw me. I quickly got used to it as it is everywhere, and very quickly it became one of my favourite flavours and one of the first things I think of when I think of French desserts.

For some strange and unexplainable reason, I don’t really like normal caramel, but add a pinch of rock salt and I cannot get enough of the sweet and salty combination. So a few weeks ago, during one of my regular domestic moments I thought I would try my hand at making my own. It is such a quick and easy thing to whip up and I definitely recommend it because it means that there aren’t all of those added preservatives and ingredients whose names look more like math equations than actual ingredients. However, this in no way means that this is a healthy recipe!

To make a cup of sauce you will need:
1 cup/200grams of white sugar
6 tablespoons/90grams of butter
½ cup/120mls of full-fat double cream
2 heaped teaspoons of rock salt 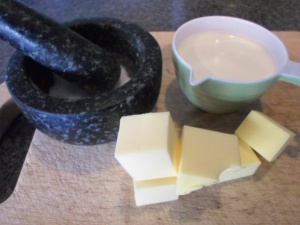 Place the sugar in a saucepan, heat and stir. As the sugar heats it will begin to stick together and form a consistency similar to crumble topping before completely liquefying. Simmer on a medium heat until it reaches a dark amber colour.

Slice the butter into cubes and stir into the sugar until it is completely melted. Add the cream and simmer for another minute, stirring the entire time.

Take it off the heat and add the rock salt. A lot of recipes use less salt than I did, but I think it needs to be quite salty for the effect to really work; but whatever works to your own tastes.

Leave it to cool before using it, or pour into a heated glass jar if you are planning on storing it. It will keep in the refrigerator for several weeks.

This is perfect drizzled over ice cream, mixed into cookie dough or used to sweeten your morning oats or porridge.

3 thoughts on “sweet or salty?”

There was an error retrieving images from Instagram. An attempt will be remade in a few minutes.

Where have your shoes been?

Travel Couple and Digital Nomads on a World Travel